The first collaboration between Audrey Hepburn and Hubert de Givenchy

Many of the most beautiful clothes in the history of cinema were worn by Audrey Hepburn in her timeless movies. One of them is Sabrina (1954), which marks the first collaboration between Audrey and Hubert de Givenchy.

Some sources say that Audrey was sent to Cristóbal Balenciaga in Paris, so that she could find a fabulous wardrobe for the movie. As “he was too busy preparing his latest collection, he sent Audrey to his friend, Hubert de Givenchy, who had worked for Balenciaga. As it turned out that Givenchy couldn’t design something especially for her either, as he was in the middle of a collection himself, Audrey asked him to show her his previous collection. It was exactly what she needed and she ended up buying a capsule wardrobe, formed of three outfits, which amounted to the sum of $850, from the French couturier for her post-Paris make-over.”

One of the outfits was the beautiful “bustier gown in white organdy, decorated with a navy floral embroidery pattern of silk thread and jet beads“. 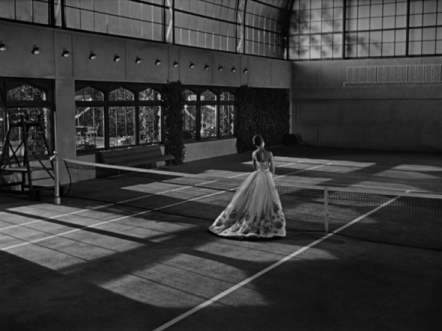 I always liked this princess white dress in Sabrina more than Audrey’s signature black dress in Breakfast at Tiffany’s. But what’s to be noted is that every outfit she chose for her movies became a symbol of the American cinema and turned Audrey into one of the first true fashion icons.

Clothes on film: Little black dress & All About Eve

Blue jeans and the cool teenager from the 50s

This site uses Akismet to reduce spam. Learn how your comment data is processed.